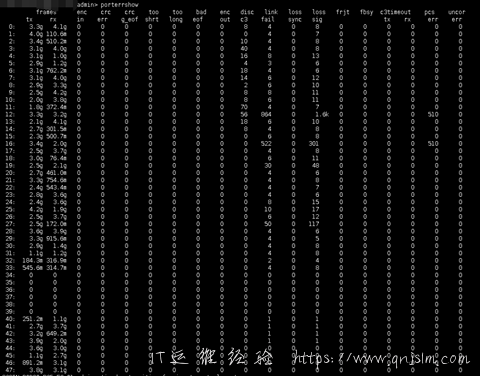 
– Counters representing the number of frames transmitted. This would be a place to gauge the traffic.


enc_in - 8bit/10bit encoding errors inside frame. Words inside of frames are encoded, if this encoding is corrupted or an error is detected enc_in is generated. If this counter is increasing, SFP/cable needs to be checked/replaced.


- 8bit/10bit encoding errors occurred in words (ordered sets) in/outside the Fibre Channel frame. Words in/outside of frames are encoded, if this encoding is corrupted or an error is detected enc in/out is generated. This is a sign of a hardware problem. Suggested actions would be to replace the cable or SFP, move cable to another port, or run porttest.


Note: Minimum compliance with the link bit error rate specification on a link continuously receiving frames would cause approximately one error every 20 minutes. Reinitialisation / reboots of the associated Nx-port can also cause these errors.


- A mathematical formula generates counters at the sending port. The receiving port uses the same formula to check and compare. Generally speaking. crc_err and enc_out errors together imply GBIC/SFP problem. Suggested actions would be to replace the cable or SFP, move cable to another port, or run porttest.


FC frames are 2148 bytes maximum. Frames that were longer than the FC maximum (SOF+header+2112bytes+CRC+EOF). If an eof is corrupted or data generation is incorrect a too_long error is reported.


The too_short error statstics counter is incremented whenever a frame, bounded by an SOF and EOF, is received and the number of words between the SOF and EOF is less than 7 words (6 words header plus 1 word CRC), i.e. 38 bytes (not 48) including the SOF and EOF.


This could be caused by the transmitter, or an unreliable link.


– Discard class 3 errors could be generated by a switch when devices send frames without performing a FLOGI first or send frames to an invalid destination. This error is just reporting that such a discard occurred.


– If a port remains in the LR Receive State for a period of time greater than a timeout period (R_T_TOV), a Link Reset Protocol Timeout shall be detected which results in a Link Failure condition (enter the NOS Transmit State). The link failure also indicates that loss of signal or loss of sync lasting longer than the R_T_TOV value was detected while not in the Offline state.


– Synchronization failures on either bit or transmission word boundaries are not separately identifiable and cause loss-of synchronization errors.